Download and modify our free, pre-prepared letter of recommendation template to give a positive reference for a trusted friend, colleague, or student. 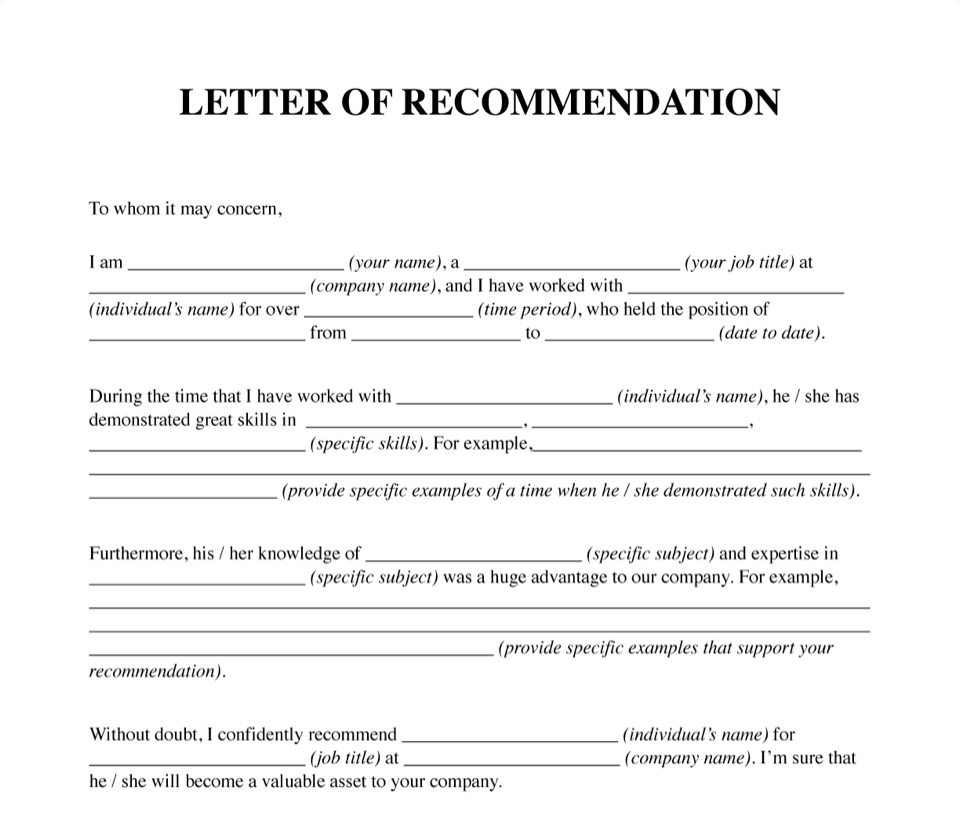 Fill forms in a few steps

What is a Letter of Recommendation

A letter of recommendation is a written and signed document that provides information and feedback about someone’s personal character or professional performance.

These letters are most often used by applicants for jobs and college courses.

The letter is usually prepared by a person who knows the applicant well and in many cases may have had some level of authority over them. For example, a teacher, professor, or manager.

Dear, [Sir/Madam/To whom it may concern]

I am writing to recommend [recommended person’s full name] for [position or course of recommendation].

Having known [recommended person] for [months/years known] as their [friend/colleague/ teacher] I am certain that they will thrive in the [position/course] due to their [main positive qualities].

During their time [working/studying] with me, they have always impressed me with their [1-2 examples of other relevant strengths] and I am therefore confidently able to recommend [recommended person] based on this experience.

I would also be more than happy to provide further details about [recommended person] if needed. I can be contacted directly via [phone number] or my personal email address: [email address].

In most situations, the letter may be requested as evidence of the applicant’s suitability before they sign an employment contract. It can also be used in other situations when a character reference is needed.

Recommendation letters can come in many forms. Depending on their purpose, they may be known by different names and can be adjusted to include specific information.

Below, you can review in detail the different Letters of Recommendation you could write.

During the rental application process, a Landlord Recommendation Letter could provide a testimonial to an applicant.

Normally, an applicant’s former landlord will be asked by the former tenant to write the letter or by the person looking for a new renter.

The endorsement should include whether the former tenant kept the residence in good condition, if they paid rent on time, and other similar details.

A College Letter of Recommendation endorses a student (normally in high school) to be admitted to a college that they are applying to. This letter accompanies the college application and can help a student be accepted to the college of their choice.

Normally, this type of letter is written by a teacher or someone with knowledge of the applicant’s grades or talent.

To advocate a person for a job position, you can use a Professional Letter of Recommendation.

This type of letter can mention the job applicant’s skills in the workplace and list any accomplishments they achieved while working for their former company.

Generally, a coworker or former employer is asked to write this type of Recommendation Letter.

For a letter that mentions the applicant’s personality, you can write a Personal Letter of Recommendation. This letter can be written for someone applying to be a tenant, for a job, or another type of vacancy.

It should be written by someone who knows the applicant well, and is a reputable person. You should be able to vouch for the applicant’s respectability, and state if they have good a character.

In most cases, a personal friend writes this type of Recommendation Letter.

A Character Reference Letter for Court is a type of recommendation letter used during trials. Their goal is to provide insight into the morals, values, and other qualities of a person undergoing court proceedings.

This kind of legal form helps judges and juries evaluate who the accused is. Typically, a Character Reference Letter for Court is written by a friend, a family member, or a co-worker.

Some examples of situations where these letters may be useful are drink-driving hearings and child custody cases.

A Graduate School Letter of Recommendation endorses a college student for a graduate school program. This letter accompanies the application and can help a student be accepted to the graduate school they wish to enter.

Normally, this type of letter is written by a college professor or the person in charge of their internship. Either way, this person should have knowledge of the applicant’s ability as a student.

To advocate for a college student to enter law school, you can write a Law School Recommendation Letter.

This type of letter should cover the skills they have shown during their time as an undergraduate student, such as dedication, impressive legal knowledge, and more.

A professor or someone who took part in any internship with the applicant could write this type of letter.

A Teacher Recommendation Letter endorses an educator for a position at an educational institution, such as an elementary school or high school.

The letter should mention teaching credentials and mention what makes the teacher the best candidate.

It’s also possible to mention how well the teacher relates with their students, and you should also mention any of the applicant’s impressive achievements.

To endorse someone for a scholarship, you should use a Scholarship Recommendation Letter.

To properly advocate someone, you should mention their accolades and the best parts of their personality.

It should be clear why the applicant is deserving of the scholarship.

There are, however, many more types of letters that can be used to provide a personal reference. These might be used for situations such as court cases or entering the military amongst others.

Key Elements of a Recommendation Letter

There are five key elements that should be usedin a recommendation letter. Include these elements to provide the information required with the correct formality required in the situation.

How to Ask for a Recommendation Letter

It’s important to talk directly to the person who will be writing your reference when you request a letter of recommendation. This could either be in-person or by phone or by email.

You ideally should request the letter a few weeks before you think you’ll need it. This helps to take into account your referee’s schedule and how busy they are likely to be when you do this.

Writing a Letter of Recommendation

Before starting your own, it’s important to plan how to write your recommendation letter.

It’s a good idea to have a clear sense of the purpose of the letter. This will ultimately depend on who you’re recommending and what you’ve worked on with them.

Considering these elements carefully will help you identify the key details or examples that you should include to give the best picture of the candidate in question.

Using a pre-written template can help you get started with this. With our expertly prepared sample document, you’ll be able to see the factors that will help create a comprehensive and effective letter.

This can also be downloaded and specially personalized to fit key details of the person you are writing about.

To have a clearer picture of what your letter of recommendation should look like, it can help to examine an example template first.

Use our sample letter below to get started or download it now to create your own modified version.

FAQs About Letters of Recommendation

Learn more about how letters of recommendation are used and how they should be written using our FAQs below.

How Long Should a Letter of Recommendation Be?

Normally a letter of recommendation is 1-2 pages in length. It shouldn’t go beyond 2 pages in total, although it could be as short as a couple of paragraphs.

Ultimately, the quality of the letter matters more than the number of pages it covers. However, it’s important to strike the balance between those 1-2 pages right to ensure there’s not too much text or too little.

How to Get a Letter of Recommendation?

Usually, people ask their referees directly for a letter of recommendation. This might happen when leaving a company or college depending on your situation.

It is worth creating a list of possible names you would like to target to ensure you’ll get at least one “yes”. You will then need to contact your chosen person by either phone or email.

Make sure to do this with plenty of time to spare before you might need the letter so your chosen person has enough time to draft the letter comprehensively.

How Long in Advance to Ask for a Letter of Recommendation?

It's generally advised to ask for a letter of recommendation about 2-3 months before it is needed. This gives the writer time to properly draft and complete the document.

You may be able to ask for a recommendation letter closer to when it is needed, perhaps 2 weeks prior to its submission. However, this isn’t advised if you want to get the most complete and properly prepared response.

Instant and complete access to our entire library of legal forms

Edit, download and print in PDF and Word format from any device

Save time and money on legal document creation